Blog: Dam! Have beavers been the answer to managing flood risk all this time?

Over the last few years, beavers have been reintroduced into parts of the country to study the potential benefits that they may have for people and wildlife. Devon, North Yorkshire, Essex, Gloucestershire, Cumbria and Cheshire are some of the locations where beavers have been released. The release of a pair of beavers, Glen and Dragonfly in Lowther Estate, Cumbria in 2020 can be followed online and on Cumbria Beavers Twitter account where you can see their latest activity.

In the UK, beavers were hunted close to extinction in the 16th century for their fur, meat and castoreum (a secretion used in perfumes, food and medicines). However, across the UK at a variety of sites, controlled releases of beavers are taking place in licensed areas to reintroduce the species and see what environmental benefits they can provide for people and wildlife.

Beavers can help to reduce the risk of flooding through building upstream dams in small watercourses. They do this to create pools in which they can move around, hide from predators and store food. The dams are temporary structures and mirror that of leaky dams which have been placed in many watercourses across the UK as part of NFM projects. Both leaky dams and beaver dams allow water to flow through, however at a much slower rate, reducing the volume of water flowing downstream to vulnerable, at risk communities during periods of heavy rainfall. Beaver dams also hold water in dry periods, helping to reduce the risk of flash-flooding downstream, reduce erosion and improve water quality by holding silt and intercepting acidic and agricultural run-off. 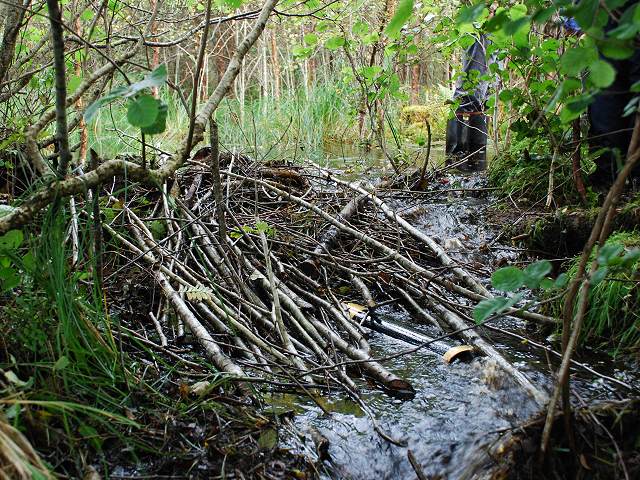 In February 2015, Devonshire Wildlife Trust was issued a license to release beavers into the wild after the discovery of a group of breeding beavers living wild on the River Otter in East Devon. This was a part of a five-year trial to monitor the beaver’s effects on the landscape and there are now at least eight breeding pairs occupying the main River Otter and the connected River Tale. It has been found that the benefits brought by the beavers outweigh the costs. Research by a team of scientists has found that they’re providing benefits to people who live in East Budleigh, which is at risk of flooding. The beavers have constructed six dams upstream of the village which have measurably and significantly reduced peak flood flows through the community. The scientists have also found that the beavers played a significant role in filtering pollutants including manure, slurry and fertilisers from the river. Wetlands were also created by the beavers which have benefited water voles, riverine birds, such as dippers and wildfowl including teal. There were also 37% more fish in the pools created by beaver dams than in comparable stretches of river. Trout have also been recorded jumping over beaver dams during high river flows.

The activity of beavers can flood valuable farmland and damage trees. However, fencing at the base of important trees and beaver deceivers can be installed (pipes that carry water through beaver dams without the beavers realising), in order to lower water levels and to reduce the risk of flooding.

Could beavers be the answer to reducing flood risk? As shown by the trial in Devon, their ability to build natural dams not only has benefit for downstream communities but also biodiversity, habitats and water quality. Large scale, hard engineered schemes are often costly and prevent the natural process of the river over topping onto its floodplain. Keeping the water in the river channel by straightening it or raising its banks will increase the speed of the flow and potentially increase flood risk and erosion to downstream communities. Some hard-engineered schemes are also thought to disrupt wildlife and biodiversity. So, with this considered, should we opt for a more natural approach to flood risk management and re-introduce beavers to other parts of the country? As shown above, they definitely have some great benefits for both people and the environment.