Cheshire Wildlife Trust have announced that they are reintroducing beavers back into Cheshire after 400 years. Beavers became extinct in the 16th century after being hunted for their fur, meat and castoreum (a secretion which is used in perfumes, food and medicine).

The pair of beavers will be released into a 4.5 hectare enclosure near Hatchmere in Delamere as part of a five year project. The project would see a pair from Scotland released into the enclosure this autumn and will become the tenth beaver reintroduction in England. Beavers can change a landscape and have a number of benefits. As beavers remove trees, this allows sunlight to shine on to ground vegetation and the dams they build can hold back water and ’slow the flow’, reducing flood risk. Holding back water can also improve water quality as polluted sediments are held back and prevented from flowing into Hatchmere Lake. Beavers can also create new habitats for insects, invertebrates and fish. 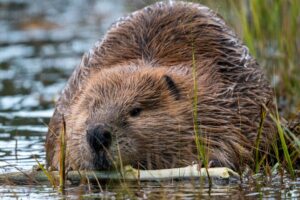 For a link to original articles here and here.