With proposals officially signed off and contracts awarded, the new scheme, led by the Environment Agency in partnership with Bury Council, will see more than 2.5 kilometres of defences put in place to provide flood protection to Radcliffe and Redvales communities for the next 100 years.

Bury Council’s Planning Control Committee unanimously approved plans for Phase 1 of the Environment Agency scheme back in March with councillors told that high river levels, caused by Storm Gareth, were a timely reminder of the risk that residents were still living with.

The latest developments mean that the first works on the ground are due to start in mid-June with construction taking place in Close Park and off Dumers Lane and Morris Street. The Agency confirmed that the proposed replacement of Hardy’s Gate Bridge will no longer take place, but some minor alterations will need take place as part of Phase 2.

Close Park in Radcliffe forms the first phase of the wider scheme.  Existing plans will see a 2.5m flood wall built at the rear of properties in Parkside Close, and a 3m-high earth embankment on the far side of the park with football pitches acting as a natural floodplain.

The design of Phase 2 is continuing and will be completed during summer 2019. The planning application for Phase 2 will be submitted by the Environment Agency in September 2019 with construction to follow on from the completion of Phase 1. The deadline for completion of the defences (excluding landscaping and environmental works) is scheduled for March 2021.

Once completed, the £40m scheme will not only protect up to 873 properties via raised flood defences at key locations along the river’s edge but will also strengthen regeneration across the community with the creation of new wildlife habitat, increased green spaces and amenity areas for the public.

Christian Wilcox, Area Flood and Coastal Risk Manager for the Environment Agency, said: “Since the Boxing Day floods in 2015, which saw devastation across the community, Radcliffe and Redvale residents have been asking for increased flood protection. It is therefore, fantastic to see that we’ve cleared the final hurdle and construction can start on this complex and important scheme.

“We have worked very closely with our partners and residents to enable this vital project to go ahead and our plans will ensure that the flood defences in Radcliffe and Redvales provide the best standard of protection to the local community for many decades to come.

“The scheme itself is a perfect example of the ways in which, by working together, we can make communities more resilient for the future.  Improved defences will be in place by March 2021, protecting hundreds of homes and businesses and making Radcliffe and Redvales a greener place to live.”

Councillor Rishi Shori, leader of Bury Council, said: “Thousands of residents will welcome this announcement that work is now starting on the £40 million new flood defences. Storm Eva caused unprecedented disruption and brought misery to many local people, for whom the events of Boxing Day 2015 are still a vivid memory. We are proud to be working with the Environment Agency in taking these vital measures to protect our community and pleased that as a council we have been able to contribute to the overall cost of the scheme.”

The Environment Agency and Bury Council will be holding a community drop-in for residents affected by construction of Phase 1 on Thursday 6th June at Close Park Rangers Hut.  A further session, to discuss the current proposals for Phase 2, is due to take place on Thursday 27th June at Radcliffe Road Baptist Church.

The sessions will provide residents the chance to find out more about the construction and timeline of the scheme. Both sessions will be held from 3pm to 7pm.

During construction of Phase 1, Environment Agency staff will be available to speak to about progress at regular community drop-ins to be held in Close Park. 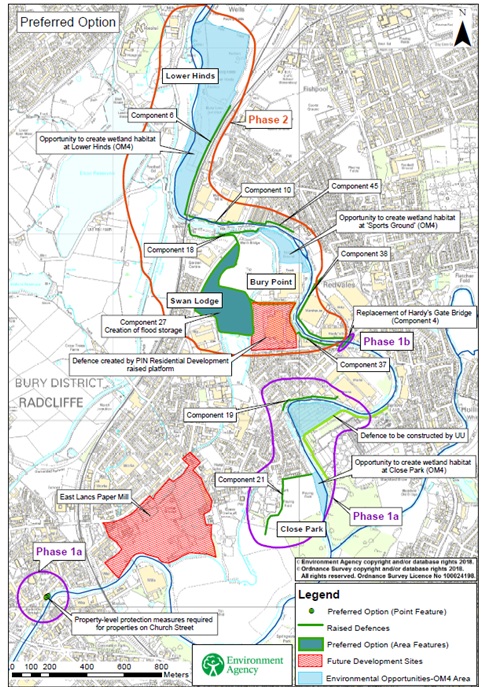 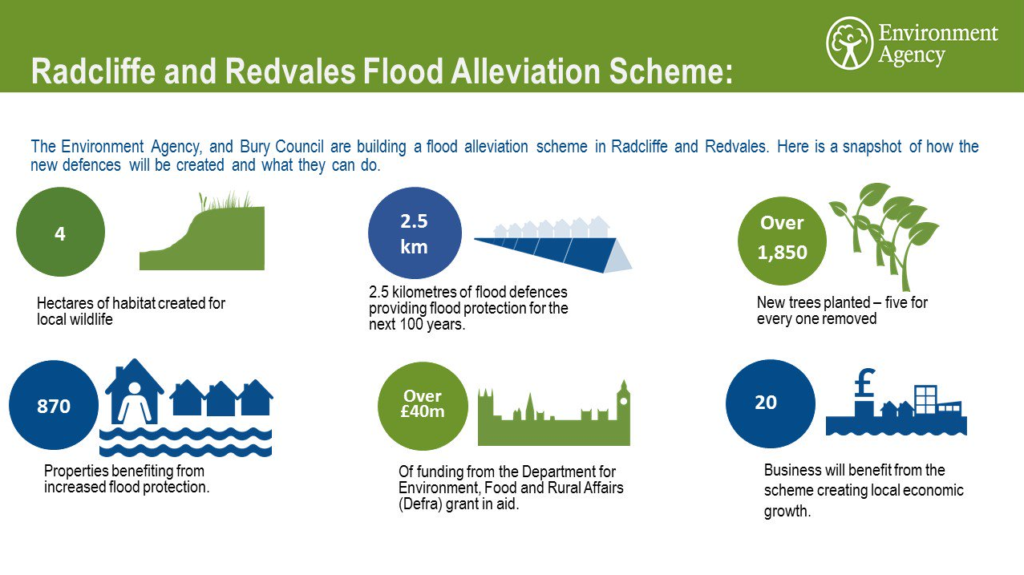