Heavy and persistent rainfall fell over Cumbria and Lancashire between the 26th and 29th October 2021, significant rainfall totals fell over Central and Western Cumbria in particular. As a result Flood warnings were issued at a number of locations and unfortunately a number of communities and properties were flooded.

Significant rainfall totals were recorded across Cumbria and Lancashire for the 72 hour period between the 26th and 29th October with some sites receiving more than a months’ worth of rainfall within this 3 day period. The table below summarises the 72 hour total rainfall and comparison with the LTA (1961-1990) monthly rainfall for October at a few selected sites and catchments across CLA that had either Flood Warning Areas activated or any notable totals.

Rainfall total comparisons for previous flood incidents can been seen below for selected sites against two of the major floods to affect the area in 2009 and 2015 to give an illustration of the magnitude of the recent incident:

A number of catchments across South, central and western Cumbria recorded significant high river levels in the top 10 on record. In particular in the Derwent, Cocker, Ehen, Leven, Duddon and Crake catchments appear to have experienced the top 5 highest levels/flows ever. 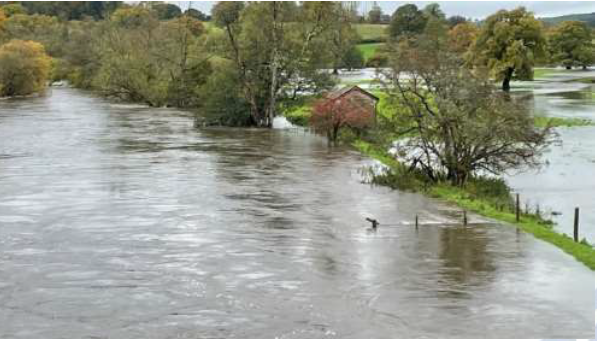