Work has begun on the Lancaster flood defence scheme

Work has begun on a multi-million pound project to build new defences along the banks of the River Lune to prevent large scale flooding similar to that seen during Storm Desmond in 2015.

Taking 12 months to complete, the £10.8million project will see the construction of a defence wall and embankment of 1.7 miles in length, stretching from Skerton Bridge to junction 34 of the M6.

On completion it will significantly reduce flood risk to the area, protecting businesses in one of the city’s most important commercial areas and helping to safeguard more than 2,000 jobs. Additional works will take place on the right bank of the river to reduce the risk of flooding to homes and businesses on Aldrens Lane. 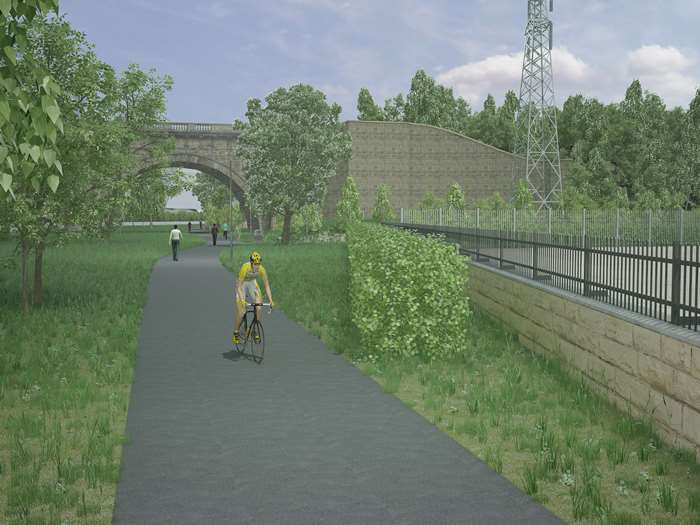 Site clearance work has begun, with the riverside path closing from February 10 for the duration of the works.

This will ensure cyclists can continue to use an off-road route safely and similar schemes have operated successfully in other parts of the district, most notably on Westgate in Morecambe.

The improvements will include two new Toucan crossings, creation of a new section of path, and road markings to give cyclists right of way at most of the side roads and junctions.

The scheme will also see 1,000 trees planted ‘on-site’ as part of the landscaping works at the end of the project, with a further 2,000 planted in the surrounding area including Miss Whalley’s Field, Tunnel Field and Newton Beck.

Councillor Tim Hamilton-Cox, Cabinet member with responsibility for economic development and regeneration, said: “This is a vitally important scheme that aims to address the unacceptably high level of flood risk immediately upstream of Lancaster city centre between Halton Weir and Skerton Bridge.

“The most vulnerable parts of this area have a 20% chance of flooding from the River Lune in any given year.

“With the construction of these new flood defences our ambition is to protect one of Lancaster’s most important commercial areas from river flooding for many years to come.”

The contractor for the project is VBA, a joint venture between VolkerStevin, Boskalis Westminster and Atkins, an SNC-Lavalin company.

Richard Walsh, VBA Project Manager, said: “VBA is proud to be involved in this scheme, bringing a wide range of benefits to the local community that go above and beyond the flood protection it will provide.

“Enhancing and resurfacing the riverside path and the wall design will transform the area alongside the River Lune, providing a lasting legacy to residents and visitors to enjoy for many years to come.”

Construction of the defences is officially known as the ‘Caton Road, Lancaster (Phase 3), Flood Risk Management Scheme’ as it is the third scheme provided in the city to reduce flooding. Phases one and two, built between 2004 and 2009, protected properties along St George’s Quay and New Quay Road.

A fourth phase is focused on mitigation measures in the area around the Mill Race and the city centre. A study to map historical watercourses and understand how they interact has recently been completed, allowing options to be identified for measures to reduce future flood risk. Partner organisations are due to meet shortly to consider these options, and their recommendations will be included in a report to be published in early 2020 with public consultation to follow.

An Environment Agency spokesperson added: “The December 2015 floods had a major impact on local businesses, residents and the wider communities of Lancaster. It’s a really positive step that work has now started to improve flood defences on this significant length of the River Lune.

“At the Environment Agency, we are committed and passionate about helping to ensure that our communities are better protected from flooding. We are proud to be working with our partners to reduce flood risk from both the River Lune and also from surface water, for the benefit of local people and businesses.”

The project is funded by the European Regional Development Fund as part of the European Structural and Investment Funds Growth Programme 2014-2020, the Environment Agency, the local levy from the regional flood and coastal committee, as well contributions from Lancaster City Council and the private sector.