Throughout December 2015, 35 properties were reported to have flooded from a combination of the River Ribble and two other watercourses in the village, Boyce’s Brook and Duddel Brook.

On 9 February 2020, it is estimated that 12 properties flooded from the River Ribble, Boyce’s Brook and Duddel Brook. The recorded rainfall and extreme height that the River Ribble eventually reached were not forecast in the lead-up to the event. Consequently the temporary defences for Ribchester were unfortunately not deployed during this event.

On 1 November 2020, it is currently estimated that 2 properties flooded from Boyce’s Brook backing up due to a blockage in the river and 1 property from surface water. 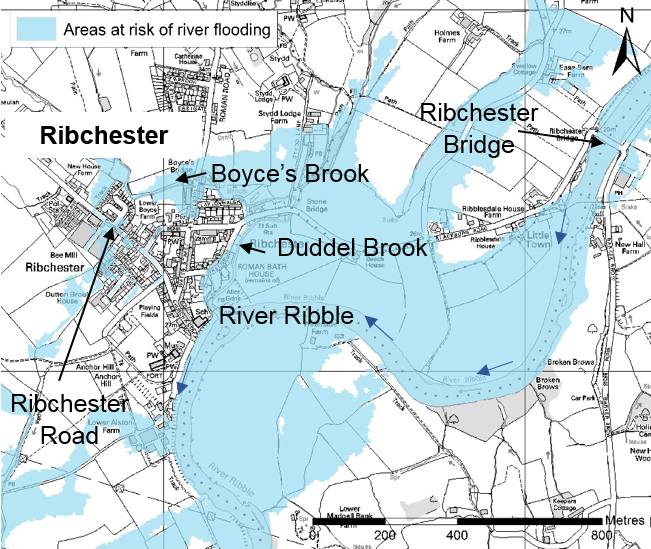 There is one embankment, on Boyce’s Brook, that is maintained by the Environment Agency (EA). Landowners are responsible for all other informal walls, high riverbanks and structures. More information on owning a watercourse can be found at https://www.gov.uk/guidance/owning-a-watercourse.

The EA have developed initial proposals for permanent flood risk management schemes in the village several times over the last 20 years. However, these proposals have been unable to meet the Flood Defence Grant in Aid cost-benefit and partnership funding criteria to secure funding to design and deliver a scheme.

Work Carried Out So Far / Timeline

A catchment based approach of slowing the flow via upstream management is promoted and undertaken by the EA. Upstream of Ribchester there have been natural flood management projects directly involving the EA at Trawden and Long Preston Deeps. The Environment Agency’s partners, such as the Ribble Rivers Trust, have ambitious plans to create vast amounts of new woodland over the coming years. This will all help to slow the overall water flow into the River Ribble from the land. More information can be found at https://ribbletrust.org.uk/news/press-releases/rivers-trust-launches-10-year-campaign-to-double-area-of-lancashires-woodlands/. 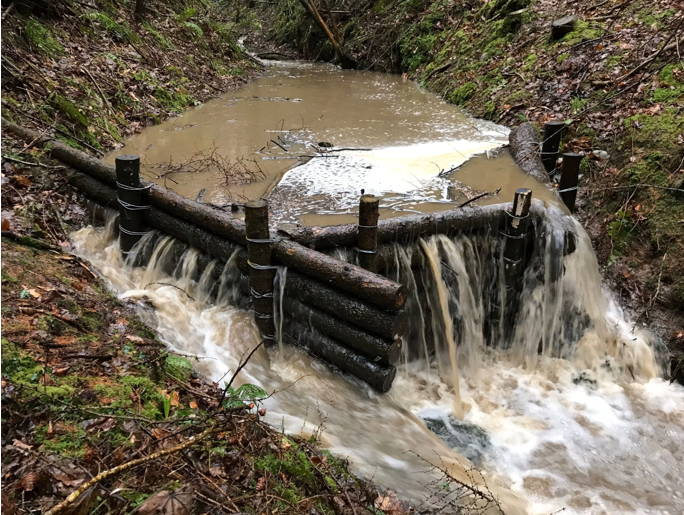 The EA are seeking to have greater community collaboration in Ribchester. They already work closely with neighbouring communities via the Whalley & Billington Flood Action Group Community and hope to develop similar partnership working in Ribchester. The aim of the collaborative work will be to increase flood resilience in the village, improve planning, preparation and communication as well as seeking to deliver local flood management measures on Boyce’s Brook and Duddel Brook.

A Temporary Defence Deployment Plan exists for Ribchester to help protect properties along Greenside from flooding resulting from high water levels on the River Ribble and the lower sections of Duddel Brook. The temporary flood barriers do not manage flooding from Boyce’s Brook or surface water.

The plans have been updated so that the temporary flood barriers can be brought to site and stored locally. This allows for a later and more certain forecast to be used to decide whether to deploy or not, preventing false alarms causing local disruption. The length of the defences have also been reduced slightly at the junction of Blackburn Road and Greenside to limit traffic disruption.

Flood Alerts and Warnings continue to be monitored and issued. Community members at risk of flooding are encouraged to sign-up for these at https://www.gov.uk/sign-up-for-flood-warnings.

More information regarding flood resilience can be found at https://flood-warning-information.service.gov.uk/what-to-do-in-a-flood.

No extra downloads at this time

No extra downloads at this time

Post (please note that teams are mostly working from home during the current Covid-19 pandemic. Please allow for more time if contacting the team via post):

Check your preparations for flooding:  https://flood-warning-information.service.gov.uk/what-to-do-in-a-flood