Otherwise known as a ‘living roof’ or an ‘eco roof’, green roofs are not a new concept with origins tracing back thousands of years.

Traditional ‘Sod Roofs’ in more recent centuries were largely popular in Scandinavia, offering insulation to the building below; keeping it cool in summer and warmer throughout the winter. The modern green roofs seen today are quite different in both construction and design, resulting in them being far more efficient in offering all of the traditional benefits of their counterparts, as well as many new environmental benefits too. Modern green roofs, comprising of several protective, storage and drainage layers were developed in Germany around the 1960s, with Berlin now home to one of the main green roof research centres in the world. 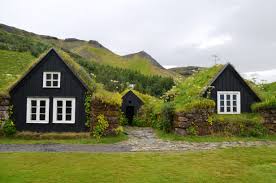 Despite the use of green roofs in many other countries for some time, they are becoming more and more popular in the UK; especially in towns and cities, helping to make the best use of an otherwise unfilled space.

Extensive green roofs are a lighter-weight roof with a shallower soil and substrate depth; usually between 20mm and 150mm and often contain turf, grasses and wildflower varieties. Extensive roofs are a popular choice for domestic installs as they tend to require little maintenance, which is a major benefit if the owner is not a particularly keen gardener. 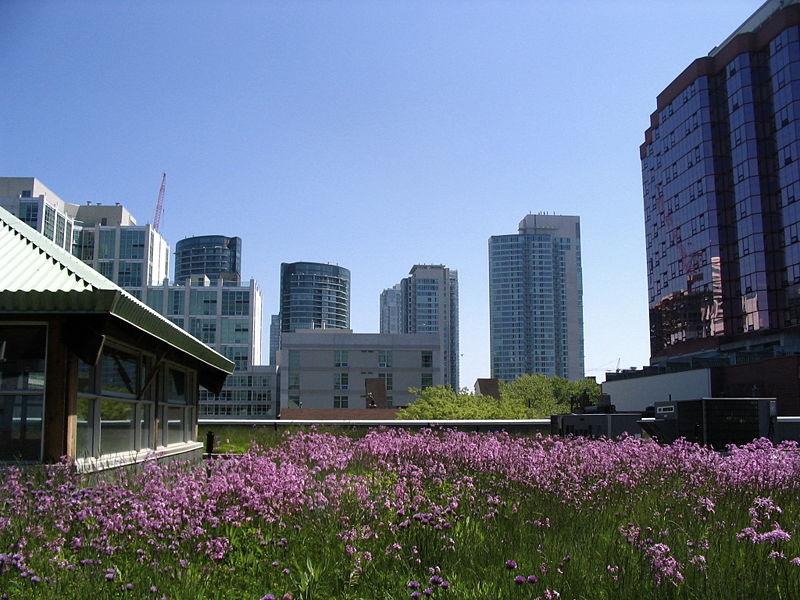 Intensive green roofs contain much deeper soil; anywhere from 150mm to 500mm+ and are capable of accommodating larger shrubs, trees, grass varieties, plants and can even be used for vegetables and food growth. Due to the increased weight of ‘intensive’ roofs, they are often more suited to commercial buildings and often seen integrated into the design and build process of newly developed high-rise commercial properties and office blocks. 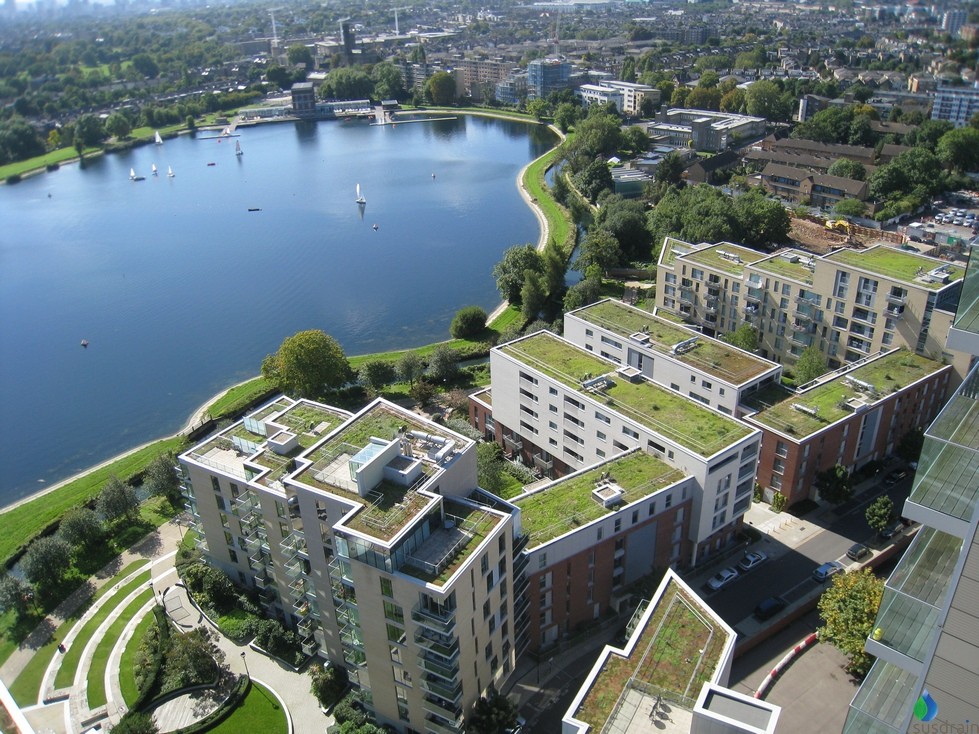 Image of green roof in Hackney by Susdrain

What are the benefits of green roofs? 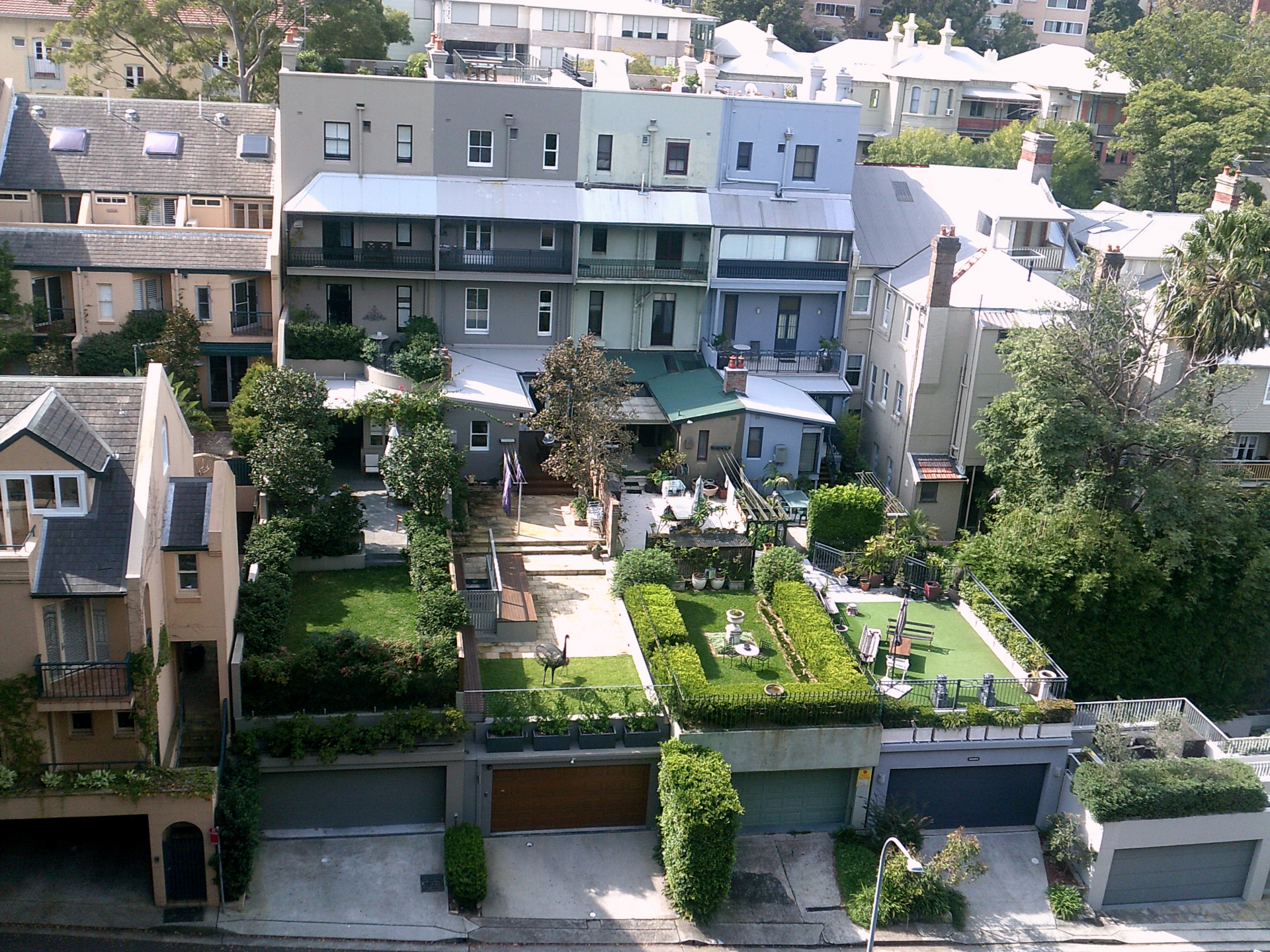 A green roof absorbs less solar radiation and heat in the summer, helping to keep properties cooler than traditional roofs can. Inner city areas act as heat traps with traditional roofs and hard surfacing absorbing light and eradiating heat into the surrounding area, contributing to what is known as the urban heat island (UHI) effect. Green roofs use the natural functions of plants and vegetation to absorb moisture and convert light energy, transferring less heat energy into the ambient air and resulting in reduced air pollutants and cooler microclimates in urban areas.

The ecological benefits and increase in biodiversity are also profound. When planted with particular plant species and wildflowers, green roofs attract a wide variety of insects, birds, bees and butterflies as well as helping to provide safe and secure nesting places for native and migratory birds.

However, one of the key uses and benefits of a green roof is in urban flood management and water retention. A green roof is one of many Sustainable Drainage Systems (SuDS) that can be integrated into the fabric of the urban environment, helping to alleviate flooding by reducing the amount of surface water runoff that enters the existing drainage infrastructure. Acting as a ‘source control’ system, green roofs process rainwater where it falls and can greatly reduce surface water runoff by up to 90%. 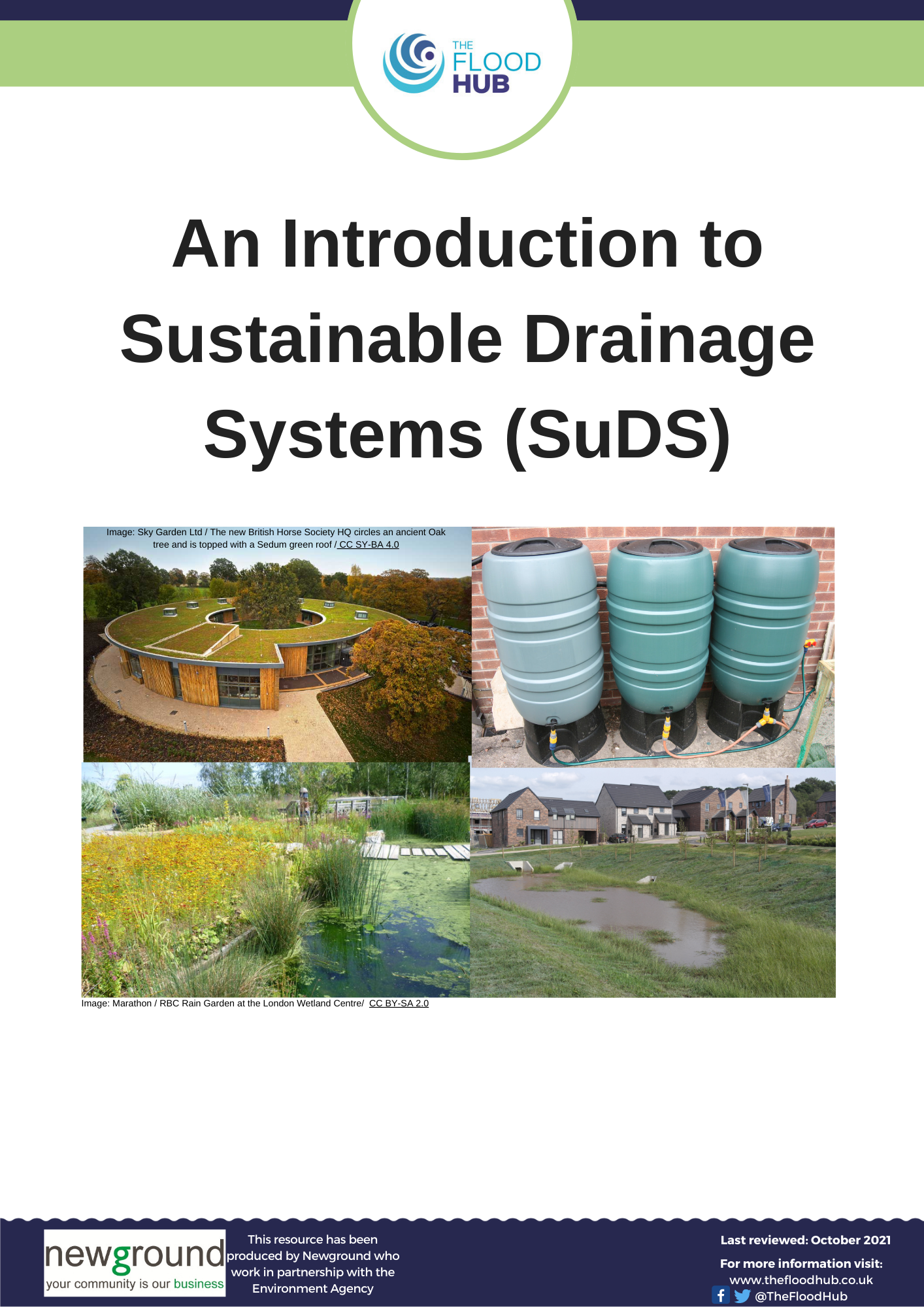 What are the drawbacks?

When it comes to retrofitting, the additional weight accompanying intensive roofs can require supplementary structural support work and strengthening, often resulting in green roof projects becoming financially unfeasible. While extensive roofs are designed to be largely self-sustaining and require minimal maintenance, most will require at least some time, energy and labour to maintain. Removing weeds, debris, cutting back and deadheading plants, as well as watering at times of low rainfall will be required.

If you want to install a green roof – what are the next steps?

First of all, contact a reputable installer. Unless your property is a listed building or located within a conservation area, you’ll be pleased to know replacing an existing traditional roof and retrofitting a green roof does not generally require planning permission. However, extensions or certain alterations to a building (such as a green roof) ‘may’ require building regulation approval; therefore, it is advised that you contact your local planning authority and check beforehand. Likewise, consulting your mortgage provider, home insurance company and neighbours is recommended to ensure there are no objections.

Due to their environmental and ecological benefits, green roofs are becoming more and more popular in countries around the world, with some governments offering incentives to homeowners and businesses who choose to install them. While it is unclear whether the UK will follow suit in the future, the benefits are there for those wishing to take the plunge and go green up top sooner rather than later!