These pages describe work the Environment Agency (EA) is undertaking to reduce flood risk in areas of Carlisle adjacent to the River Caldew; this includes communities in the Denton Holme, Caldewgate, Shaddongate and Willowholme areas of the city. This is part of the EA’s ongoing work to reduce and manage flood risk across the City of Carlisle.

Further information on the areas affected by this scheme and the causes of flooding in this area can be found here.

After Storm Desmond in 2015, a study was undertaken which looked into ways of reducing flood risk across the city. At this time, the most feasible option focused on improvements to the river channel and existing flood defences. Recent work has shown that this is no longer a viable option to further reduce flood risk in this area of Carlisle and the EA are unable to continue investing in this option.

Furthermore, there have been several recent updates to the methods that the EA use to assess flood risk. This includes future flood risk based on climate change predictions. There have also been changes to the ways the EA can apply for funding.

Further information on the work the EA have undertaken in this area since Storm Desmond can be found here.

In order to explore the best possible solutions, the EA have secured funding to investigate a range of options that have not been possible to date. Over the next 18 months, the EA will be undertaking a series of studies, which they will refer to as feasibility assessments. The EA will assess a series of new options with the aim of providing long term, and climate resilient, flood risk management for this area of the city.

You can find out more information about the work undertaken to date, and the EA’s ambitions for the Caldew Flood Risk Management Scheme here.

Location and Causes of Flooding

The River Caldew and Willowholme flood cell is the focus of the Caldew Flood Risk Management Scheme. The area comprises the floodplains on both banks of the River Caldew, as well as the left bank of the River Eden, and includes approximately 1,700 properties at risk of flooding.

There are two main causes of flooding in this area. The risk comes from the two largest rivers: the River Caldew and the River Eden. The differing sizes and locations of the catchments feeding these two rivers means that a flood event will typically affect one watercourse more than the other. 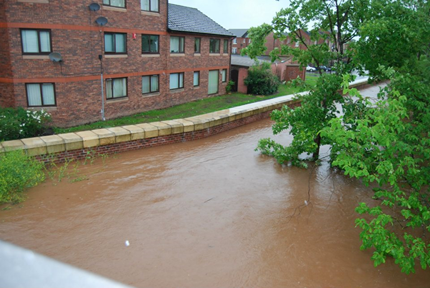 Flood defences protecting the city from flooding during the highest recorded flows on the River Caldew in June 2012.

The largest flows ever recorded on the River Caldew were in June 2012. The flood defences in this event performed well and extensive flooding to the city was avoided. In comparison, the flows on the River Eden at Great Corby (upstream of Carlisle) during this event were only approximately a fifth of the peak flow recorded following Storm Desmond.

As each of these rivers affect the same connected area of floodplain, the EA need a flood scheme that addresses all these flood mechanisms. The EA would be unlikely to be able to fund a scheme which addresses the flood risk from only one of these rivers in isolation. The main reason for this is that the EA cannot claim the funding to mitigate flood risk to properties unless each potential source of flooding is taken into account.

The Caldew Flood Risk Management scheme must therefore reduce flood risk arising from high flows on both the Rivers Eden and Caldew, as well as considering other watercourses and potential sources of flooding.

Summary of Work Undertaken Since 2015

A significant amount of work has been undertaken to improve the EA’s understanding of the flood risk along the River Caldew corridor through Carlisle.

This work has been necessary to help the EA understand how they can best protect the area from future flooding, and to demonstrate how government funding (such as a Flood Defence Grant in Aid) can help them effectively achieve this.

The type of work undertaken so far includes:

The most feasible option identified in the work undertaken to date was based on maximising the volume of flood water that could be passed through the city without flooding. In some locations this was to be delivered by removing additional vegetation that currently grows within the river channel. In other locations the existing flood defences would have been raised or extended.

It recently became clear that the combination of options the EA had chosen was not financially viable or technically feasible. This is partly because the level of funding the scheme qualified for was lower than initially estimated, and partly because estimated costs to deliver the scheme had increased. This resulted in a very large funding gap. Furthermore, the nature of this scheme meant that the EA were unable to adapt it to provide an increased level of protection consistent with recently revised climate change predictions.

The EA have therefore concluded that it is no longer possible to continue to invest in the leading option.

However, new guidance on the way the EA assess flood risk and fund their flood risk management schemes has been developed and recently published. This will allow the EA to explore new opportunities to mitigate flood risk in ways that would not previously have been possible. The EA will do this by undertaking a series of feasibility assessments in the first instance.

The Way Forward for the Caldew FRMS

The way the EA design and fund flood schemes has changed in recent years. These changes have the potential to improve the possibility of some flood risk management options which were not previously considered viable in this area of the city. As a result of this the EA have been able to secure funding to assess the feasibility of several new options. This work is expected to take 18 months.

The EA will engage with members of the public, affected landowners and third parties such as Network Rail during this period.

The feasibility study will build on the EA’s knowledge on flood risk mechanisms and mitigation options developed so far.  This includes upstream measures for managing flood risk from the River Caldew, as well complementary measures within the city. The objective of this study is to identify a preferred option, or more likely a combination of options. The options will be selected based on their economic viability and fundability as well as their ability to reduce flood risk in a robust, sustainable and acceptable manner.

The following FAQs have been provided by the EA.

What is a feasibility assessment?

Will we be given complete transparency on the possible solutions and the reasonings behind them? Will we have the opportunity to give our opinions and actually be heard, even if it means delays to the project?

How do you plan on ensuring all stakeholders are kept informed throughout each stage of the process?

Is this area now at greater risk of flooding because of the flood defences constructed elsewhere in the city?

How much money have you spent in Carlisle since 2015….?

What type of options are being assessed as part of the feasibility study?

What is being done to minimise the risk of further flooding in the meantime?

Do you suspect any of the solutions will cause disruption to the surrounding environment? Removal of trees, changes to landscape etc?

How long will it be before a scheme is delivered?

What effect will climate change have on flood risk in Carlisle?

Why are you not using Natural Flood Management to slow the flow and store water upstream?

Why are you not removing gravel which is accumulating in the channel?

Why is more of the vegetation not removed from the channel?

You suggest that the guidance has been updated since the original appraisal work was undertaken. Specifically which pieces of updated guidance are being referred to as part of the feasibility studies?

If you would like to provide any feedback on the information provided or would like to contact the Carlisle Flood Risk Management Scheme project team please use the following email address: CarlisleFRMS@environment-agency.gov.uk.