The project team remain on site and construction of the new flood defences continues in line with government guidance. We have updated our frequently asked questions and released the latest newsletter to update you further. Please see these below. (1 June 2020)

In December 2015 Lancaster City suffered extensive flooding including flooding from the River Lune when existing defences were overtopped. During this period, flows of around 1,750 m3 per second, the highest flow ever recorded on an English river, were recorded at Caton, immediately upstream of Lancaster. The flooding caused widespread damage to business and residential properties and caused major disruption to infrastructure. This included the loss of power to around 60,000 properties due to the flooding of the Caton Road electricity sub-station.

As a result, Lancaster City Council have worked in close partnership with the Environment Agency to deliver the £12.1m Caton Road, Lancaster Flood Risk Management Scheme (FRMS). The scheme was completed in December 2020 and will provide 2.8km (1.7 miles) of improved flood defences. Flood risk from both the River Lune and surface water will be reduced. Over 170 homes and businesses currently at a high risk of flooding will be better protected as a result of the scheme.

The project team were able to secure £3.85M in European Regional Development Funding as part of the European Structural and Investment Funds Growth Programme 2014-2020 towards the scheme. This means that the defences have been delivered around 2 years earlier as a result. 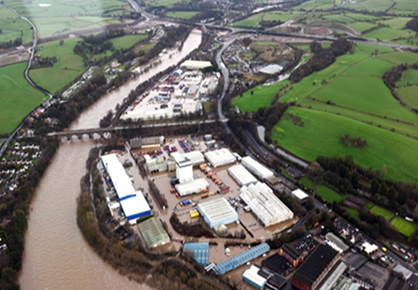 Q. What work is being undertaken?

A. The scheme will provide 2.8km (1.7 miles) of enhanced flood defences to provide protection from the River Lune and surface water flooding. It will provide protection to homes and businesses on both banks of the River Lune. Improvements to the flood defences will be made from the Holiday Inn at Junction 34 of the M6 motorway and finish at the A683, Skerton Bridge in Lancaster City Centre. On the North Bank this includes enhanced flood mitigation in the Aldrens Lane area.

Q. Why is the work being carried out?

A. In December 2015 Lancaster City suffered extensive flooding including the flooding from the River Lune when existing defences were overtopped. During this period, flows of around 1,750 cubic metres per second, the highest flow ever recorded in an English river, were experienced immediately upstream. This is the equivalent of filling an Olympic size swimming pool every one and a half seconds. The flooding caused widespread damage to businesses and residential properties and caused major disruption to infrastructure. This included the loss of power to around 60,000 properties due to the flooding of Caton Road sub-station. There have been multiple flooding events following this event, testing the flood defences.

Q. How long will the work take?

A. The work started in January 2020 with the works substantially completing in early 2021. Additional landscaping and tree planting works will be taking place in Spring 2021.

Q. How much is the project costing, and where is the funding coming from?

A. The project cost is £10.8million, and is funded by the European Regional Development Fund as part of the European Structural and Investment Funds Growth Programme 2014-2020, the Environment Agency, the Local Levy from the Regional Flood and Coastal Committee, as well contributions from Lancaster City Council and the private sector.

Q. What are the impacts of Brexit on the EU finding?

Q. Why have you chosen to close the riverside path?

A. For health and safety reasons and physical constraints, we have had no option but to close the riverside path. While the path is closed an alternative route will be available for cyclists and pedestrians along Caton Road, with improvements being made to create a multi-use path along existing pavements. For those cyclists heading to Morecambe or riding ‘The Way of The Roses’ route, an alternative route will be signed utilising the cycling facilities alongside the Bay Gateway. This will ensure cyclists can continue to use an off-road route safely and similar schemes have operated successfully in other parts of the district.

Q. How long will the cycle lane be closed for?

A. The riverside path will be closed from early February 2020 until mid March 2021. The flood defences are now complete, however there is still construction underway to add copings and cladding to the flood defences to improve the health and safety. There are also additional landscaping works to undertake.

Q. Are there any plans to replace the trees that have been felled to accommodate the works?

A. Yes! – It is a requirement of the planning consent that lost trees are replaced at a ratio of 3:1 so it is intended to re-plant up to 1,000 trees ‘on-site’ as part of the landscaping works to be implemented at the end of the project, and due to the restricted site area a further 2,000 trees ‘off-site’ at locations in the surrounding area including Ms Whalley’s Field, Tunnel Field and Newton Beck.

Q. Will any additional properties be flooded elsewhere as a result of this scheme?

A. Modelling has been undertaken which demonstrates that there are no additional properties that will be impacted as a result of the scheme.

Q. Are there any other flood risk management projects being undertaken?

A. There are investigations ongoing into surface water flooding in the city centre, Halton and around Cote Beck by Lancashire County Council. The Lune Rivers Trust is also undertaking a study looking to improve fish migration at Skerton Weir.

Q. Was dredging considered as an alternative option?

A. The bed of the River Lune is predominantly rock and the size of the Lune estuary means that the volume of material that would need to be dredged and the frequency of this to impact flooding would be very large and not cost effective. It is very expensive to do and must be done regularly.

Q. How can I keep up to date on the scheme?

A. You can visit www.thefloodhub.co.uk/lancaster for the most up to date information, or Lancaster City Council website www.Lancaster.gov.uk/Lune3project.

Q. Will the scheme cause additional flooding to properties upstream?

A. The hydraulic modelling shows that the Caton Road, Lancaster, flood defence scheme would not have any major impact on flood levels up or downstream of the River Lune. No modelling can be precise, and will contain margins of error. The modelling for this scheme shows that, potentially, flood depths up or downstream could be slightly higher during a 1% (1 in 100) year event by up to a maximum of 40mm (4cm) at the most. However, the Environment Agency allow for a modelling tolerance and it may be that flood levels up or downstream could actually remain the same as they are now. They have also validated what the model shows with actual flood events in Lancaster in 2015 and 2017 for example for accuracy.

Q. Has Covid-19 had an impact on the scheme?

A. Work is continuing on the Flood Risk Management Scheme in Lancaster to better protect the city from the effects of flooding despite the ongoing challenges faced by Covid-19. The work has been identified as essential by the government and they are keen for progress to continue, where it remains safe to do so. The priority in these difficult times is the health, safety and wellbeing of staff and the public, and additional safety measures have therefore been put in place. There has been understandably some impact on our supply chain, workforce and travel, however it is expected at this stage to remain on time and programme.

Q. Will surface water flooding be improved as a result of the scheme?

A. Short and intense rainfall events can sometimes exceed the capacity of highway drainage systems and cause short term surface water flooding on the road only to subside again as the rainfall recedes. The Environment Agency are working with Lancashire County Council Highways department to discuss the issues regarding drainage and surface water flooding in the area. They will keep you updated as these plans progress.