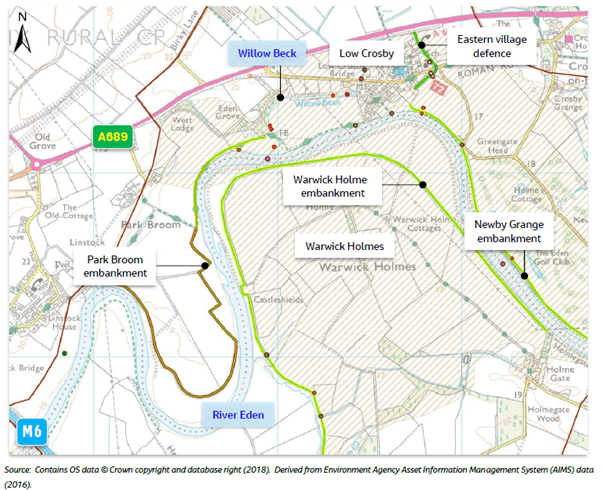 The village has suffered fluvial flooding on multiple occasions historically. In recent years, flooding has occurred because of high flows in the River Eden in January 2005, November 2009, December 2015 (following Storm Desmond) and most recently in February 2020 (following Storm Ciara).

The severe flooding experienced at Low Crosby on 5th and 6th December 2015, as a result of Storm Desmond, was unprecedented. This storm caused a period of prolonged, intense rainfall across Northern England, falling on an already saturated catchment, and led to high river levels and flooding throughout Cumbria and beyond. The flow in the River Eden in to the Carlisle area on 6th of December was the highest ever recorded, resulting in flood levels in some locations of approximately 600mm higher than those experienced during the previous record set in January 2005.

In June 2016, the Cumbria Strategic Flood Partnership published the Cumbria Flood Action Plan which set out how flood risk would be managed in an integrated manner at a catchment-wide scale. The plan identifies a need to improve the standard of protection for Low Crosby.

The Environment Agency are the lead organisation currently investigating the viability of improving the standard of protection to Low Crosby as a part of the Low Crosby Flood Risk Management Scheme (FRMS). They are working in partnership with other Risk Management Authorities, such as Cumbria County Council and United Utilities, in order to understand the likely impacts of climate change on flood risk and to determine feasible options to reduce the risk of flooding.

The Environment Agency Project Team has been working with the stakeholders and the Flood Action Group to identify a preferred option to progress with, in order to reduce the flood risk to Low Crosby. The preferred option identified, involves re-profiling of the existing Warwick Holme flood embankments (see figure 1), to enable flood waters to flow from the River Eden across the Holme during periods of flooding.

By allowing this to occur, the water levels at Low Crosby are reduced sufficiently, which reduces the risk of flooding to the village from the undefended western side (Willow Beck side). The supporting modelling information demonstrates that we can achieve a 1 in 200 year Standard of Protection, based on current data. This is a Standard of Protection of a similar magnitude to a Storm Desmond event.

Start Date of the Construction Works

The programme to take the project through from design to construction sees a start date of Summer 2022.

Comprehensive information about the scheme is provided on the ‘Engagement Pack’ link to the left. Newsletters are provided at 8 week intervals, following the release of the Engagement Pack on 10/05/2021. These give regular updates the status of the project and provide other useful project related information.

The Environment Agency would love to hear your feedback on the proposal for the Low Crosby Flood Risk Management Scheme. To gain a clear understanding about the proposal and to provide feedback, please visit the Low Crosby Engagement Pack page here.

The page contains detailed information about the shortlisted options for the scheme, the assessment of these options, and the Environment Agency’s preferred way to reduce flood risk to Low Crosby. You can then provide your thoughts and feedback about the proposal using the Feedback Form.

Should you have any queries regarding the works, please contact CarlisleFRMS@environment-agency.gov.uk.

The project team will be providing more frequent updates over the coming months. Further details on the scheme going forwards can be accessed through the newsletters which will be displayed on community notice boards, and on this page.